A great supporter and former neighbour, professor John Taylor used to nag me that I ought to make a record of my naturalistic and labour saving methods in maintaining Bolton Percy cemetery.

My basic philosophy is that if I take care of the weeds the plants will grow themselves. Nature abhors a vacuum.
There is obviously more to it than this whether in a cemetery or in a garden. Not only does one need to know how to recognise and understand your plants but you need a speedy and effective way to control weeds. There are no good public accounts about how to use glyphosate in the way I do and one of the reasons I blog is to tell anyone who will listen!

What my blog lacks at the moment is bringing my glyphosate posts coherently together.
Today I try to point a way through the thicket.
Summaries of past posts
In ‘batting for glyphosate’ I make out a case for using this herbicide. I have not changed my mind that for me it is very safe and effective. In my own case maintaining over six acres of mainly naturalistic gardens I could not garden without it. There is much doubting comment on the net about this wonderful material. I intend in the future to write a more forthright post as to why I think such comment is misguided and wrong.

In this post I make some introductory comments about some of the basics of using glyphosate. In particular I emphasize that for anyone with other than the smallest garden they ought to invest in a decent knapsack sprayer. A good knapsack with the appropriate nozzle can be much more accurate than even a hand sprayer. I use a yellow cone nozzle, rather than the type often advised in the literature written for farmers by agricultural engineers!

Gardeners invest huge amounts on items such as lawn mowers and other machinery but tend to buy a cheap knapsack which apart from being endlessly frustrating and inaccurate to use soon falls apart. A good professional sprayer will last ’for ever’. Myself as a frequent user who is very poor with machinery and to whom maintenance is a thing that other people do, get at least 2000 cycles of use before I think of getting a new one. Every ten years!
I am currently ordering an all singing and dancing Berthoud sprayer (illustrated in the link) for Jackie Giles who is one of the wonderful people now helping in Bolton Percy cemetery garden.  It now costs £165 already assembled. The cheaper Berthoud model (above) at about £130 is almost as good but I think you have to assemble it – so that cuts me out!
My advice to get a good sprayer for glyphosate is contradictory to my advice when spraying your cabbages or even a short hedge with insecticide when I suggest you use a very cheap two quid hand sprayer.

In my post about buying glyphosate I made some very guarded comments about purchasing commercial glyphosate. I was more outspoken in last weeks post!

In this post I discussed a few points about mixing glyphosate and calculating the appropriate strength. I also wrote about spraying the over-grown village plot which was a field of ground elder spreading out under the hedge up to the public footpath and also onto neighbouring perimeter gardens. I was adamant that it was as important to eliminate the ground elder under the hedge as well as on the rest of the plot. I described how I do not spray such a plot walking in a straight line with my nozzle held at a steady height.
With my nozzle pointing downwards I more duck and weave adjusting my spray direction to the nature and contour of the patch that the nozzle hovers over.

Brand names
This was a frivolous short post about brand names. It makes the important point that glyphosate is out of patent and anyone can manufacture it. Only Monsanto and any company with which they have shared the brand name can call it Roundup.
All forms of glyphosate are for practical purposes exactly the same but vary hugely in price and concentration.

Selectivity by directional spraying
In some respects a significant post that starts to tackle something that most gardeners and gardening writers shy away from - spraying amongst garden plants. Fraught with difficulties in inexperienced hands selectivity by directional spraying is perhaps best avoided by most people but without it I would find it impossible to maintain the large areas I do.
That is not to say that in most gardens there are not large weedy areas near to, but not intimate with garden plants that can easily and safely be sprayed. For example it is relatively easy to spray under a hedge or under shrubs and trees without damaging them.

Selectivity by timing is exemplified by spraying a weedy daffodil plot when the daffodils have died down dormant, or spraying couch in a herbaceous border when the herbaceous plants have completely died down.
The post also gives the traditional advice to get rid of perennial weeds before planting a new garden or garden feature.

Glyphosate in Winter
Gardeners are sometimes confused because glyphosate is slower in Winter and won't kill perennial weeds that have gone dormant. It won't kill dormant garden plants either which is a huge advantage because it will kill still green weeds growing amongst them. In addition weeds mechanically controlled in Winter by such as hoeing will re-root in wet conditions whereas sprayed weeds will die.

Is glyphosate quick?
This revolves around the fact that adverts for rival products to glyphosate portray it as slow. Good gardeners 'manage' their gardens and don't want a quick fix for the day. It is not slow to become inactive in the soil and enable replanting and will eliminate perennial weed better than any rival.

Glyphosate always gets the blame for any sick plants in a garden no matter that it may not be the cause. I review how to recognize damage and avoid it. This post ends with using glyphosate in a hand sprayer to eliminate convolvulus (bindweed).

You can hardly see the ceanothus under Steven’s bindweed! I sprayed it last July and the weed has not returned. There are just a few little corners in the garden where I had missed the odd bindweed and where a second treatment would be desirable!

Not about glyphosate as such but about the benefits of minimum cultivations in limiting carbon dioxide pollution and efficiently producing food on a world wide scale. Glyphosate facilitates most no till or low till systems. I believe the world is a much better place for its existence. 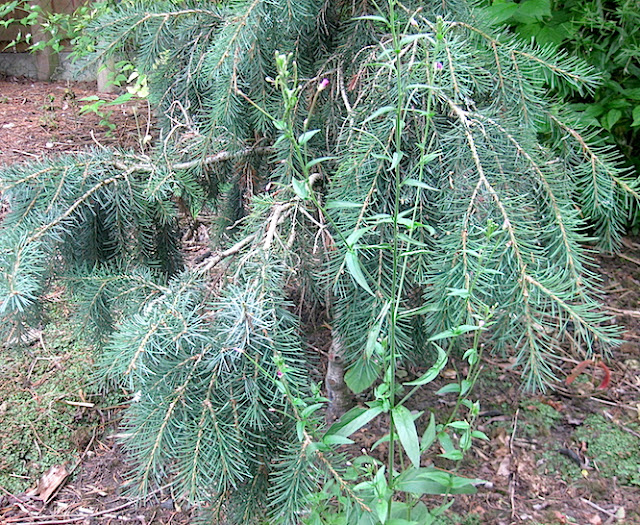 There are many ways to control weeds. Here the ubiquitous epilobium needs yanking out. I would normally just throw them onto the ground but at this stage it will still set seed.