Boy’s day out
Peter suggested that I might like a trip over the Pennines to the trade exhibition and I jumped at the chance. The main show of the year for the nursery trade has been held on the same twenty three acre nursery site for 46 years now. It must be thirty years since I have been to anything like it. Just to see a huge area covered with modern glasshouses is exciting and it is a revelation to see methods of modern large scale production.

We drove down to Bakewell and deposited Julie and Brenda. We would later retrieve them in Buxton at Peter’s daughters'.  We enjoyed a coffee before leaving the girls. When we asked the café owner if he sold Bakewell tart he replied in the negative and claimed to have been out with too many!

We were then on our own and talked gardening, horticultural science and blogging none stop all the way over. Peter’s sat-nav took us a delightful rural route and the first evidence of the show was when we arrived and joined the huge car park of thousands of cars in a huge field next to the Jodrell Bank telescope. I dread to think how they must manage all those cars after heavy rain. 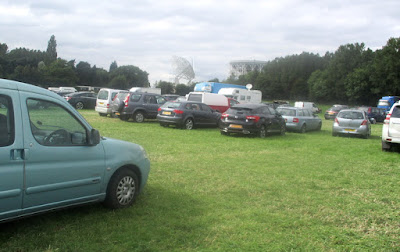 Everyone in professional ornamental horticulture goes. The garden centre and nursery traders order their plants and sundry supplies for the year. Horticultural producers meet their suppliers and purchase their materials and equipment. The displays are as lavish as Chelsea. Nursery suppliers from all over the world are there. Forty percent of nursery stock now comes from Europe and every large European wholesale nursery has a presence.
Much horticultural production now takes place in huge specialized nurseries. In some cases we are talking about millions of plants and growing methods are extremely refined. I think many amateur gardeners seek to copy the commercial trade’s methods and in my opinion this is ill advised. For example the trade’s choice of fertilisers and composts are extremely precise. Efforts by the amateur to duplicate this is both uneconomic and ineffective. Many ‘special composts’ and ‘targeted fertilisers’ available at the garden centre are inferior and inappropriate and hugely expensive.
Nor would I advise amateurs to attempt grower’s extreme hygiene and prophylactic spraying! As to mechanized irrigation, give me a can and a hosepipe for the wide range of plants I grow. All have very different watering requirements. I feel many gardeners play at being professional.

A taste of the show

Jim at Mole Seeds
There is a sub story here! Back in Bolton Percy, Jim sought me out when I was working in the cemetery garden early last year. He had just moved into my old house in the village. He took me back for a coffee and gave me a tour of the house and garden. It emerged he worked for Mole Seeds. Although their main market is commercial growers they also supply amateurs and their minimum order is pre vat only ten pounds. They have a brilliant catalogue and instructive web presence. Their smallest and extremely generous packets cost a little more than other seedsman but I take the view that virtually all seed is viable in at least the second year. Fifty F1 hybrid tomato seeds, for example, at perhaps four pounds a packet lasts me ten years.
I asked Jim about the cowboys I have recently discovered selling repackaged seed on the net. A dubious practice but tempting at 99 pence for a packet of ten F1 hybrids.
Things go full circle and Jim is now one of the keen and knowledgeable volunteers who help me in the cemetery garden.
I call him Mr Mole!