A case for conifers, a conifer showcase

Mainly about conifers and birds Not only do conifers enhance your garden they support wildlife
Some gardeners seem to consider conifers as alien invaders that have no place in a garden and believe them to be ecologically inferior. They are wrong.

Regular readers will know that since Harry died I have been doing blogmeister Cathi’s garden. They also know that my most popular posts are based on her pictures of animals. I have now realised why she has so many. Her garden is not only a haven for wildlife with  grass, trees, water and flowers, she has plenty of conifers.

It suddenly dawned on me that the new growth on her conifers looked rather pretty. I took it it into my head that it would make an ‘easy post’ if I just took a few pictures. I wandered back to my own garden thinking of course I don't have many and found I had fifteen! There is so much more to say about conifers than just pretty pictures.

Most conifers are evergreen and provide an all year round structure to the garden. The word ‘ever green’ is wrong in that conifers provide the most fantastic range of dramatic foliage colours. Not, as some claim static, but ever changing from season to season as they make young foliage and those wonderful cones.
No other group of plants provides such a wide range of well defined and dramatic shapes.

Most conifers provide cover and shelter. In design terms they provide a ‘permanent structure’ to the garden. They make very fine focal points too! As windbreaks they are second to none - although personally I prefer individual specimens to screens. They do actually make very fine hedges and a wider range respond to tight clipping than you might imagine. Even the dreaded Leyland makes a wonderful hedge if clipped six times a year!

Conifer’s achilles heal is that many grow too large for the small garden. With some you need to be ruthless. If they are becoming too big cut them down and plant some new ones! Some so called ‘dwarf conifers’ might when established grow a foot a year. Other conifers much more!

If carefully selected there are plenty of genuine dwarf ones. No matter, most conifers make fine plants lasting many years before becoming too big. Some eventually tall ones such as Picea breweriana have you wishing they might grow faster. Mine has taken ten years to make an elegant statement only now.
I wish more gardeners took the view that if a plant gives you fantastic value for say fifteen years and has achieved Its ‘use by date’ then it becomes expendable. It is not a crime to chop down!
I have chopped down more than fifty overgrown conifers over the years and have organised the felling of very many more! I cut as cleanly as possible close to the ground. I have never dug one out.

Cathi’s contribution
I e-mailed Cathi begging a few ornithological pictures and telling her of my intention to promote the values of conifers for wildlife. She replied…

Sure! Lots of finches nest in conifers. Lots of birds eat the insects that live in the bark.
Thrushes, blackbirds like yew berries. Even sparrows
Hawks and buzzards nest in some conifers. You will have a lot of pics of these birds anyway. I’ll have a look for others. Got some of Harry’s finch pics - somewhere!

Most gardens are ecolological hotspots of diversity. It is good to have a very wide range of plants that promote rich wildlife habitats for bees, butterflies, insects, amphibians and birds. Conifers make a valuable contribution.

Coniferous woodland
Most research with regard to conifers and wildlife is carried out on dense woodland. Most woodland, whether deciduous
or coniferous, native or alien are valuable habitats but inferior to gardens in terms of diversity. Broadleaf forest has greater diversity than conifers.
But don’t damn coniferous forest. They provide a woodland home to very distinct residents. These include birds such as siskins, goldcrests, crested tit and crossbills. Raptors such as sparrowhawks and goshawks nest in conifers but prefer them in open woodlands or as individual specimens. They really like Cathi’s garden.
Many butterflies thrive and pupate in coniferous bark. 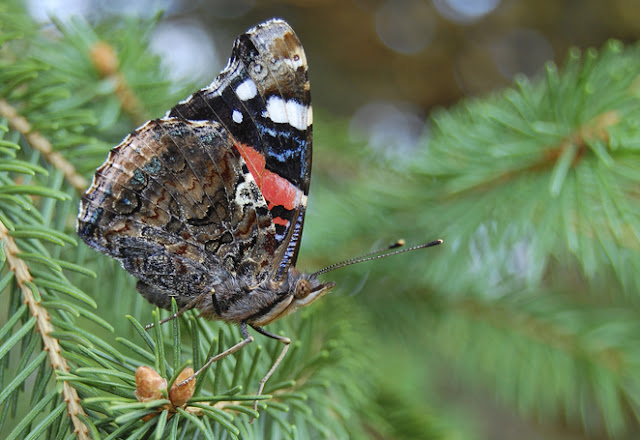 Thank you Jim
Unashamed to gather information from knowledgable personal contacts I asked naturalist Jim. He is one of the Bolton Percy cemetery C team. By shear coincidence he lives in my old Bolton Percy home. Here is his e mail

Hi Roger - good to see you yesterday - I and my parents enjoyed looking around the cemetery on the Open day. 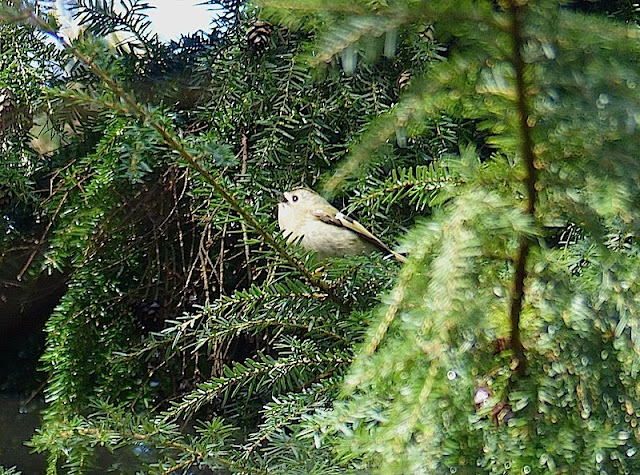 Goldcrest - the tiny resident bird with the yellow stripe on its head - conifers are more or less essential for it, and this year especially it has been commonly heard singing round the village with a very high pitched repetitive song. 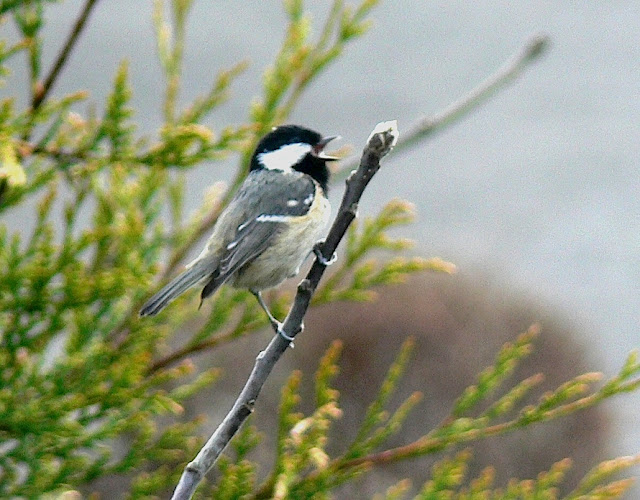 Coal tit is another fan of Conifers, but not exclusively so 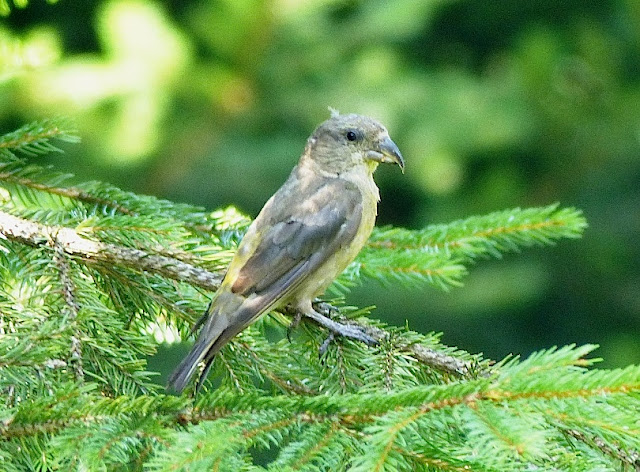 Crossbill - another conifer specialist with crossed mandibles for prizing cones apart (cheating here - the pic was taken in Austria) - although it's not really a garden bird. There's a chance you'll get the occasional one passing through if you have a few mature pines around.

Re conifers in gardens - In principle I would say in a mixed garden, conifers are great, as they provide relatively secure nesting and roosting sites, and do attract spiders which spin webs in the branches, so the birds feed on those.

As a monocrop they are not so good (in my opinion) as they block out all the light from the ground, so there's no ground flora, and they can trash the soil pH with their acidic needles.
Hope this is of interest
Regards
Jim

When Cathi’s fantastic pictures came in I had a dilemma. What with Jim’s great contribution perhaps I ought to make a post about birds rather than gardens. Bird posts are very popular… and my own snaps are somewhat blurred. No matter, I will go ahead and celebrate wildlife, conifers and gardens.

Links
I wrote a series of posts about the fossil trees - all conifers
wollemi pine
dawn redwood (and swamp cypress)
ginkgo
The cemetery c team and basal pruning of chamaecyparis
Posted by Roger Brook - No Dig Gardener at 08:21