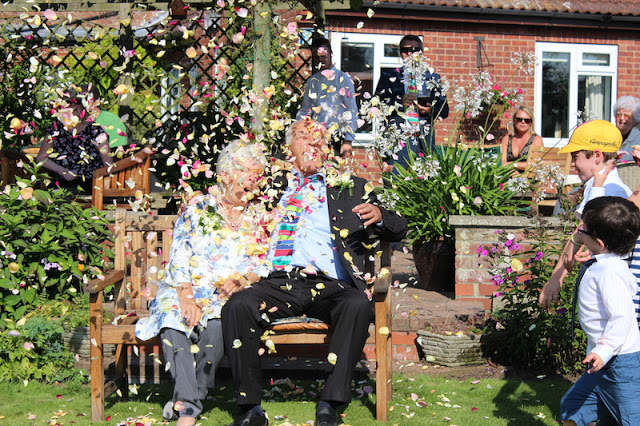 When I started blogging I dared dream that if I achieved a million readings in my lifetime I would be extremely old and my life would be over.
So I am starting to worry!

Cajoled into blogging by Cathi and Harry four years ago I think their ambition was that an old man in his dotage might gain some pleasure by passing on his knowledge to a few dozen readers. Even that would be a huge advance on when he wrote monthly in Bolton Percy church magazine.
I used to find writing a chore. Harry despaired when I started to blog and he looked out of his window and saw me fumbling with my camera. I had barely clicked one in the last fifty years. I did not do pictures. As a child if an exam question said ‘with the aid of a diagram’ it filled me with dread and was always avoided.
Harry feared I would get depressed because no one would read me. Brenda suggested I would start to neglect my garden and talked about blogweeds. Blogweeds are things that grow when a blogger is writing when he should really be doing.
Harry would have been thrilled at my success, he was my greatest supporter. Brenda barely concedes that my garden is better when I claim that blogging has concentrated my mind. It has gone to my head and made me a bore.This did not deter her from marrying me last year!

I want to thank Harry, Cathi and Brenda. Without their contributions I would have never got started or ever continued.

When I rationalise why I started blogging I think it was because as a former teacher I still had something to say. It was no good throwing my toys at the tele when a TV personality yet again said something stupid and wrong!  (This is a common failing of horticultural lecturers and ‘professionals’)
I have had some interesting gardening experiences and wanted to leave some kind of record out in the ether. I do garden in some unusual ways!
I wanted to
I think it is working and now am a bold blogging bore. Almost every morning I am up at about 6.30 and spend perhaps 90 minutes preparing and posting. Other than repeatedly checking my figures and responding to reader’s comments that’s it for the day. Other than whenever I see Cathi or Peter or indeed anyone who will listen I talk about blogs! Other than daydreaming and writing posts in my head. Other than wandering around with my camera. Other than...

Cathi advised me to make my posts short and snappy. Harry insisted I only use high quality pictures and generously shared his collection. Unfortunately not many were of flowers and he and Cathi were regularly in tucks watching me from their window. Brenda’s son Steven suggested I might give tips for the day. That’s definitely not me and it would be no original contribution. Cathi edited my first eighty seven posts and transformed them into  intelligible English. Poor girl my pictures were just add ons and came to her in no particular order!

I am ever grateful to those of you who use the comments column. It would be impossible to mention all your names and I will confine myself to thank the two of you who I have met. Blogger Sue Garett can be relied on for cheeky pertinent comment! Rick always adds thoughtful additions and generally agrees with me.
In point of fact I am happy to take objection and would welcome more debate than actually happens. I fear in the past I have myself not always been delicate when commenting in other places.
I would also like to thank biologist and gardener Peter Williams who lives in the village and has provided articles, advice and ideas. When we forged our friendship ten years ago I am told he said I was a ‘good find’. Ditto Peter and Julie.
I never expected the blog to change my belief system! ‘Fool on a Hill’ blundered in and sparked my intense interest in hybridization and my suppressed childhood thought that it must play a significant role in evolution.To me now hybridity as a principal component of evolution stands out a mile and I find there is evidence. I never imagined I would have the temerity as a layman to enter the fray.

Pondering Past Posts
Now past three hundred I approach each new one with naive enthusiasm. I can never predict which ones will be damp squibs or others more successful. Success bears little correlation to effort.

I will mention a few that I particularly remember. I wonder why Mission Unaccomplished was so successful when my other posts about my holiday in Costa Rica were relatively unread? Perhaps googlers were searching for something different.

The unsexy titled ‘Her Indoors, Part 3’ about a fairly obscure house plant has been read nearly three thousand times!  I have now done several posts that have been much more successful but that was in early days. Where did that come from?

Harry always said that posts about birds would always be popular. Shame I know so little about them! It was a godsend when he plucked a wayward sparrow hawk that had wandered into my garage and cupped in his hands brought it to our door. Brenda and I snapped away. I now realise the morning light was quite perfect. A modern camera  works wonders....
Those pictures really got my blog underway
It now astounds me that when I check the table of ten day top hits few are about gardening! 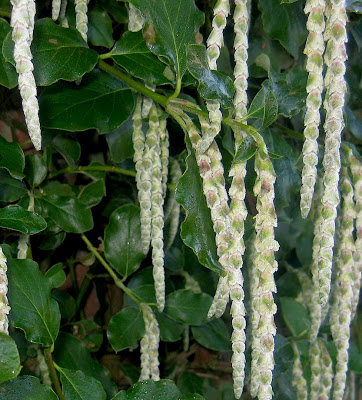 When I wrote in 2013 about a scorching phenomenon that occurs in some seasons on Garrya elliptica it hit a raw nerve and has now been read 6500 times! It thrills me that today when I searched for the link the quickest way to find it was to put Garrya elliptica in google and find myself on page one!
It gave me an even greater thrill when my son Ben reported that his friend searching for garrya had found his father!

I am frequently surprised. Sudden shrub death was one of the first posts when I started to include more detail and became rather verbose. I regarded the post as a failure as it had had little attention. I stumbled on it today and found it has made 5000. Whoops, I found a major typo. My big picture of Betula jaquemontii was labelled Acer jaquemontii - oh the shame. Why did no one tell me… obviously nobody was looking!

The posts I enjoy writing the most are those with serious intent but are rather ‘off the wall’.
I was particularly pleased with my effort about not washing pots and why ‘damping off’ is not a problem for me.

Many gardeners do not understand water/soil relationships. I was very serious about my naughty innuendos when trying to explain field capacity with a story about using a sponge in my bath.
It was early days and Cathi feared for my image and muttering ‘shades of grey’ refused to accept it. I stumbled on it a year later and bravely posted. No one took umbrage and hardly anyone read it.

My post with the obscure name Part BPTA… was an early attempt at humour. It focussed on Harry’s genius as an engineer - and my own incompetence. I include it today remembering Harry who died three years ago 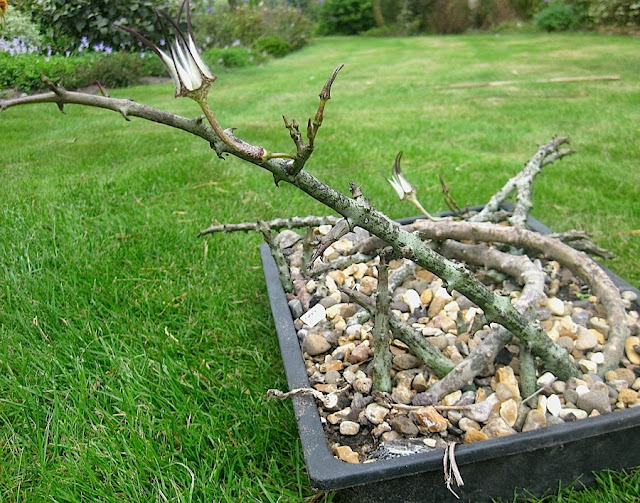 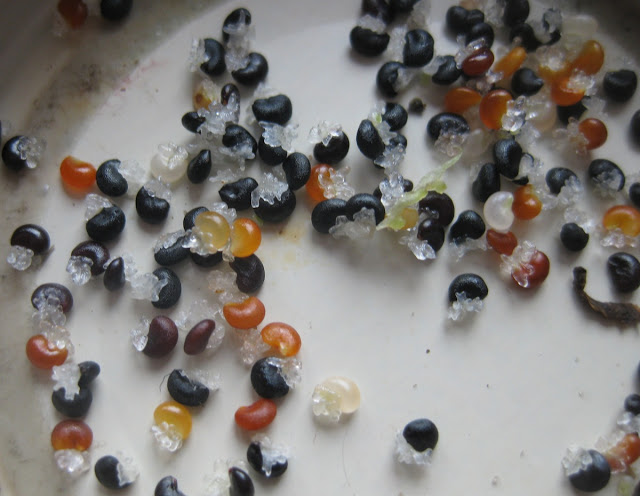 No one wanted to read about myrmecochory

What happened to no digging?
It’s all still there. I have exhausted the main arguments for not digging and discussed all the reasons why gardeners dig. I don’t wish to repeat myself. (Well not very much). I of course continue to incorporate my minimum cultivation philosophy in posts but I do urge gardeners who wish to seriously stop digging to read my previous articles linked in the themes column. Similarly those gardeners who are persuaded that their gardens can be improved by using glyphosate should study my series of glyphosate posts. That will be hard work and some of my methods are unorthodox - and horticulturally dangerous in novice hands. I can say without much contradiction that they are fairly unique!

Polygon
The week I started blogging we bought a lovebird. Poppy changed our life even more than blogging.  Poppy got several mentions. He was named after early reader Poppy Murray. She mildly protested that he was a male!
Last year our pet died. We were distraught. I could not bring myself to tell you.
Against our better judgement we are grateful to Po Simpson and Cathi who brought us Sparkle, a conure. Last week was his first hatch day. I am told they live for thirty years….