Brenda noted in horror that I am promoting myself yet again. By the looks of my historical hair and choice of shirts I don’t think it will enhance my reputation. Let me wallow in nostalgia.

I have been fumbling through my tightly packed box of newspaper and magazine cuttings. They are mainly about Bolton Percy cemetery but some are about my own gardens and dicentras. 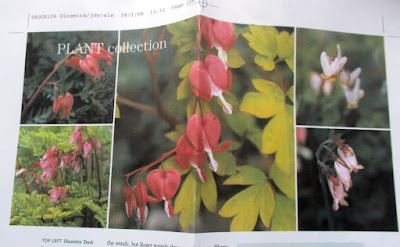 There was a time when the press beat a path to my door. Gardens in churchyards were somewhat unusual. Perhaps fifty articles were written over a fifteen year period. Nine separate TV features were filmed.

My churchyards are now out of fashion. Apart from over exposure my own feeling is that using glyphosate to direct natural ecologies is anathema to those who are green.

There have been some lovely articles written and amazing ingenuity displayed in their titles. I have been privileged to meet great writers, photographers and gardeners.

Gardening memories
Two very well known American nurseryman - I forget their names - were  on a well publicised busman’s holiday observing UK horticulture and came to the cemetery. One of them, a plant breeder spotted a special heuchera with nice markings in my patch of the Green Finch strain. I vegetatively propagated it  and still grow it in my own garden twenty five years later.
He opened his wallet and produced a wad of … multicoloured heuchera leaves - and declared that these would be his new introductions the next year. We all grow his heucheras today! 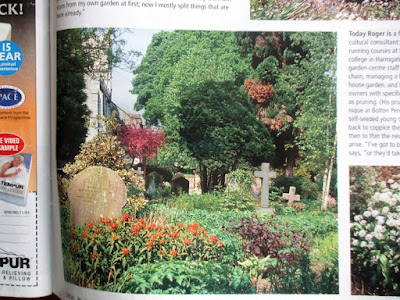 I have written before about the launching at Chelsea of Yorkshire writer Joyce Fussey’s wonderful white dicentra. It had been micro-propagated at Askham Bryan college and nurseryman Adrian Bloom came up to see it in my collection. At the time he had made a name for himself as an advocate of dwarf conifers. We walked past a very trendy expensively landscaped garden of conifers which was totally out of character with its village location. I asked his opinion. He just pulled a face.
Adrian told me that his namesake dicentra, red Dicentra ‘Adrian Bloom’ did not do very well for him but the red ‘Bacchanal' did very much better. I said with me it was the other way round.
He was fascinated by my yellow climbing Dicentra scandens which had also been micro propagated at college.
A couple of years later he was selling it and Joyce Fussey’s white ‘Snowflakes’ by the thousands.
I know no-one who has been able to keep ‘Snowflakes’ alive - including myself. 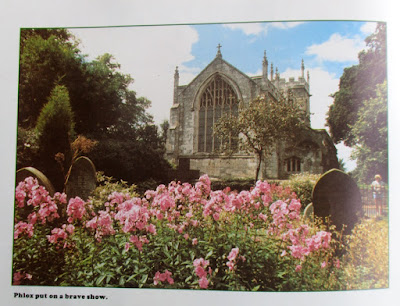 Thirty five years ago my wife took a phone call from Channel Four. Would Roger help with a programme filmed in the churchyard. It was a series called ‘Five Minutes’ and lasted the same. On a vague religious theme it was about churches. “No good talking to Roger, he is not a church goer”
I immediately phoned back yes!
The way TV normally covered the churchyard was to get me talking and later overlay the best of my nonsense to their film.
They sat me down in a deck chair in a pretty place in the churchyard and pointed the camera. The very first question was about the deep spiritual meaning of life. I failed that one. I did better on the gardening.
In a typical verbose sentence I said “Other than the use of glyphosate that is totally essential to my management, I use no fertilisers, insecticides or fungicides and leave everything to nature. They edited away the first part of the sentence! Anyone watching would think me totally green!
It was actually a very nice programme and Chanel Four used it four times! A lady told me her daughter saw me in New Zealand!

In to me a lovely sequel twenty five years later an elderly lady approached me at the end of my cemetery lecture. Did I remember that programme? She had been the producer!

* Two hours a week? what does he find to do?  -  Churchyard visitor who had no idea of maintenance inputs for a flower garden. In actual fact my all-time average labour input in creating and maintaining Bolton Percy is much closer to one hour a week.
* Hello Roger, are you still doing the cemetery?  -  Bolton Percy resident ten years after I had moved. He imagines the cemetery has maintained itself.
* Little did I know when I knocked on the Rector’s door and offered to spray off the weed in the cemetery how it would change my life.  -  Roger Brook  and repeated endlessly at the start of his lecture
* Oh what a mess  - Visitor to Worsbrough churchyard. She expects a cemetery to be traditional mown grass. All five acres with a meagre budget and no voluntary help what-so-ever. Similar comments have been made several times - as recent as yesterday!
* Eeek (or something similar)  -  Lady who fled the cemetery on hearing I use glyphosate 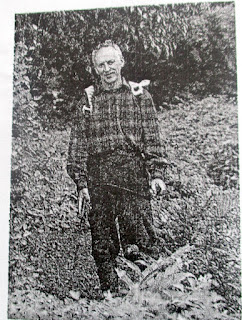 * Glad you have not dressed up specially for the filming  - Liz Rigby when visiting the cemetery for Gardener’s World twenty years ago. In actual fact I had!
* What beautiful moss  -  Liz Rigby as she swooned over a  gravestone and examined the soil surface
* Damned pearlwort on Gardener’s World - Vanessa Cooke
* I have to remind them to remove their Gucci watches  -  Producer when ‘Curious Gardeners’ filmed in the cemetery
* How lovely  -  Lady moved to tears
* Where are they burying you?  - Alan Mason
* No need for bonemeal  -  Cemetery visitor who knows my aversion to this so called fertiliser
* Roger will be opening the churchyard next week  -  Jeff Hamilton as he introduced Liz Rigby’s piece on Gardener’s World. I had a thousand visitors! (They don’t promote open days anymore)
* If you read everything in Amateur Gardening for two years you won’t need to read a gardening magazine again  - Bob Wall keen gardening friend of my father’s when I was 14.  Amateur Gardening ignored this storyline when they visited Boundary Cottage
Amateur Gardening came to Boundary Cottage. This appeared under the title of ‘Reader’s Gardens’ ! 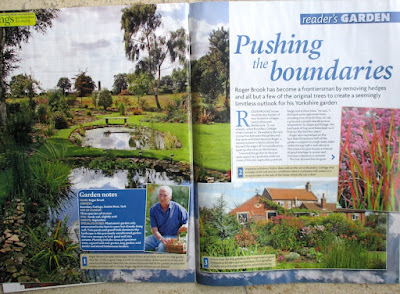 The picture below appeared in a Yorkshire magazine. Brenda later bumped into the house vendor in a supermarket and he had seen the article….. 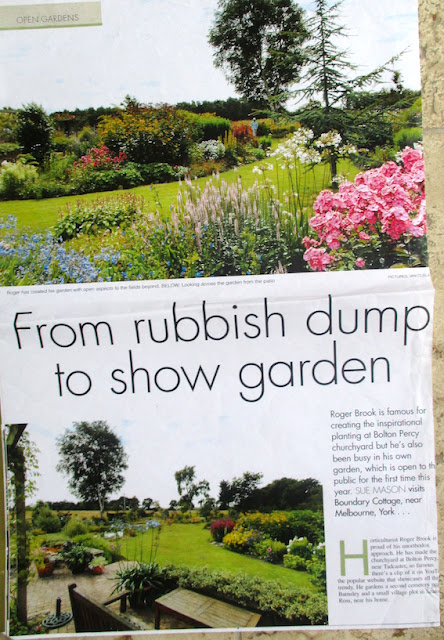 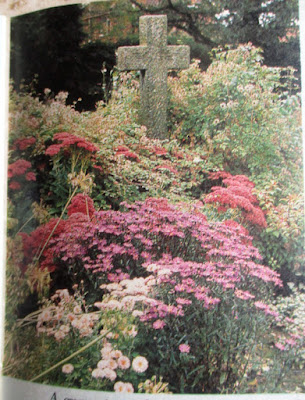 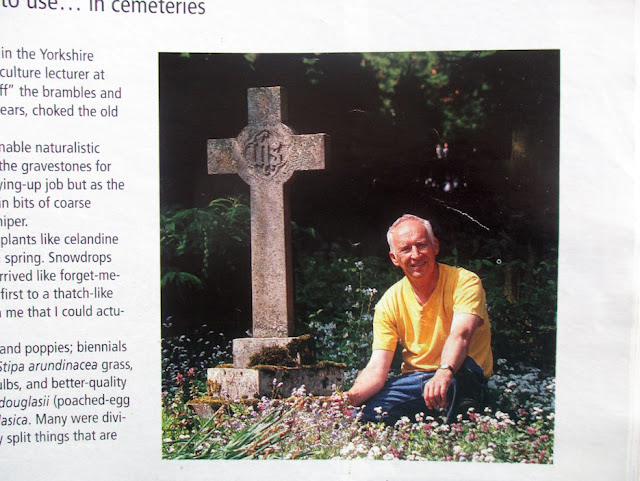 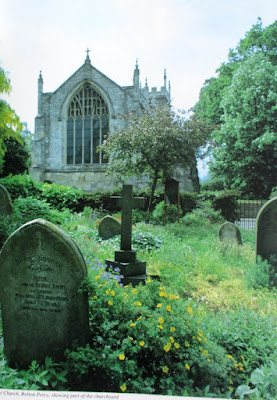 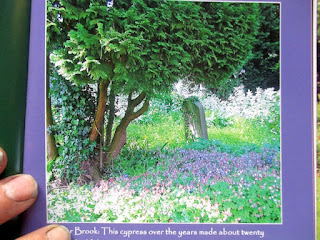 Two months ago I received an e-mail from the Netherlands. This lovely gentleman had visited Bolton Percy in1989. He had taken pictures of the cemetery. He discovered me when he read my blog! He has compiled a small booklet. It contains his own pictures, my pictures from the blog and exquisite photographs taken by Marianne Majerus just before the Millenium. He had only printed six copies and kindly gave me one. It is really beautiful - I shall always treasure it. We would have loved to have bought more to give to our friends. Our friend Cathi runs Yorkshire Publishing who do self published books. It has given us an idea.
You can see Marianne Majerus’s photos if you go to her website and insert Bolton Percy in her search box.