The Hidden Life of Trees by Peter Wohlleben 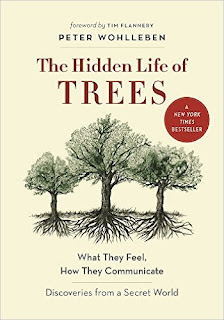 When a dedicated ecologist/forester manages trees for a lifetime he gains fascinating insights. When as an author he writes a best selling book that does not pull its punches or dumb down its content it is well worth reading.
It is not my purpose to review this excellent book - and it does have its defects as it balances scientific reporting with popular culture. 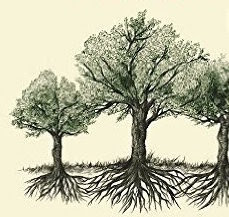 The book cover is drawn by an artist and not a botanist!

It is Peter Wohlleben’s ability to think ‘out of the box’ and challenge conventional opinion that grabbed my attention. A reviewing professor said that each chapter had it’s ‘aha’ moments - I know what she means.
I want today to highlight just three things that I want to explore. One in particular excited me greatly!

1. Connections
Ever heard of the World Wood Web? Most of the plants in a forest are connected - as are some of the plants in your garden. It is now mainstream science how plants share resources and information. Peter  Wohlleben says that they ‘talk’ to each other.
* In ancient beech woods many roots are naturally grafted together and trees are joined. (Root grafting across species barriers is on the other hand rare). 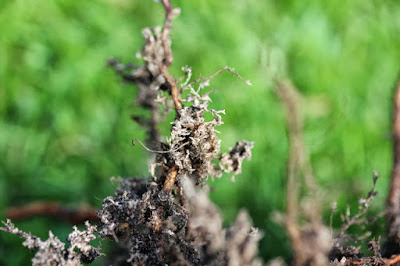 * Most plants form symbiotic root associations with a very wide range of mycorrhizal fungi. Such fungi produce huge nets of mycelium and make connections between multiple  and diverse plants. I have previously suggested that all the bluebells in a natural forest would not be there without tree friendly fungi. Sugars, amino acids and numerous other organic compounds such as plant hormones are exchanged and without mycorrhiza many plants would find insufficient inorganic nutrients.
* Electrical connections act much more slowly than in animals. Information is transmitted at a rate of about an inch in three seconds. Never-the-less it surely gets there. I read in a recent ‘New Scientist’ that the effects of different electric potentials in living organisms are of much greater importance than previously realised. Very significant epigenetic effects are being discovered. One scientist  suggested this area of study is a huge new domain.
* Volatile chemicals move through the air. Pheromones can signal imminent attack of pests to the neighbours and astoundingly will invite predators and parasites of the pests to a tasty meal.
* We will say nothing today about the sex life of plants facilitated by scent
* Touch. Branches on trees and their neighbours grow neatly together. Have you ever pruned out a huge piece of a shrub (en passant excellent pruning) and when it is gone you would hardly know? Good vibrations!

Peter Wohlleben enumerates numerous examples of connectivity in action.
*Trees help their neighbours that have fallen on bad times.
*Protecting the unity of a forest is in every tree’s interest.
*Trees do their damnedest to look after their children
*Trees can associate across species barriers via mycorrhiza to their mutual benefit. In the appendix Canadian Professor of Forest Ecology, Dr. Suzanne Sinard quotes how young paper birch and conifers have been shown to have a symbiotic relationship.
*Ancient tree stumps sometimes (albeit rarely) are kept alive for many years by their neighbours.
*Synchronisation of high fruiting 'mast years' in beech and oak

2. Stem flow
You won’t find much in the botany books about how plants can intercept and direct rain. Not all do, and a beech and a spruce are completely different. You might have noticed spruce and firs are a great place to stay dry if the heavens open. (Perhaps not in thunder). They cast off water out to the fringes or retain water in the canopy. This is an adaptation to the wet and cold places they grow in their natural habitat. As much as half inch of rain might be held in the canopy and will be lost to evaporation later.
The beech which often grows in dry habitat wants to keep all the water it can get. Peter Wohlleben  says that in storms you can watch heavy rain drain out of the branches and channel down the trunk to the roots.
Scientist Peter Williams put his spoke in this one when he pointed out to me that tree roots go much further than a tree canopy although he did give some ground (pun partly intended) when I reminded him we were talking about forest and not necessarily about an individual tree.
To be fair to the author he does state that even the beech will waste to evaporation half of the water that falls on its canopy.

I once read in the New Scientist about certain plants that grow in very dry infertile arid soil and rely on stem flow not only to channel water but also flush in nutrients from such as bird lime. 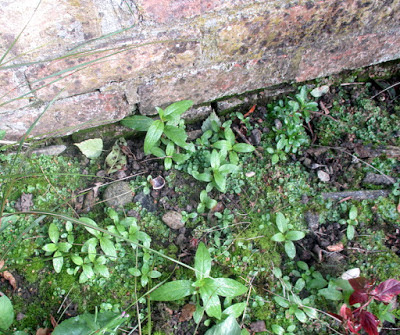 I have mentioned stem flow myself in relation to rosette forming weeds such as epilobiums when you spray them with glyphosate. If light  rain (unfortunately) follows application, the weedkiller is washed straight to the roots and the weed is still killed.
I first observed stem flow when on my knees under a potato in extremely light rain. I noticed every drop was channeled down grooves on its surfaces direct to the roots. (Rude comments invited).

3. Peter Wohlleben rubbishes the standard explanation of how water gets to the top of a 300 foot tree.

You might understand my excitement after my recent post on this topic which promoted former student Alan Warwick’s previously unpublished and highly unorthodox theory.
My post went down like a lead balloon! Five hundred loyal followers read it perhaps out of habit but there were no comments and it has not been read since!
It was not of one of my better efforts. I completely bodged my attempt to  accommodate the standard theory with Alan’s proposal of a ‘push' rather than a ‘pull’.
Cathi described my post as a complete dog’s breakfast.

The standard explanation of upward water movement enrols transpiration as the driving force and enlists the alleged phenomenon of cohesion of water molecules as they hold together up complete water columns all the way from the roots.

Like my friend Alan Warwick, Peter Wohlleben does not believe the standard theory.
What got me excited was Wohlleben’s report about research which listened to the columns of water within a tree trunk. The researchers detected thousands of bubbles. This was enough for my hero to reject the cohesion theory. He does not go further however and leaves the phenomenon a mystery.

Alan’s theory, although it does not depend exactly on physical bubbles, does depend on the kind of pressures that occur in a bottle of champagne.
I have added an addenda to my previous post and invite you to go there and read more!

Buy The Secret Life of Trees

I wrote about mycorrhiza