Reasons not to dig 7. You will destroy mycorrhizal networks 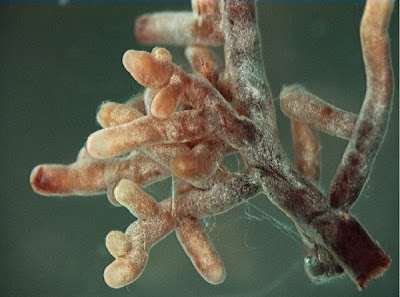 Fifty years ago my first encounter with mycorrhiza was in the Duneman seed bed. Foresters would sow their trees in a seedbed of composted deciduous and coniferous leaf litter. Because of the natural symbiotic association between soil-living fungus and plant, mimicking the forest floor, the technique produced very fine sturdy plants. Now, when I pop down the road and see my friend Peter Williams’ strong seed-raised cut leaf maples I think I see the same thing. He sows and raises his fine plants in his home made mix of well composted leaf litter and mown grass.

Ninety five percent of plants in the wild form mycorrhizal associations. This mutual arrangement enables them to thrive and in some cases mycorrhiza are needed for the plants to survive. All the bluebells in a natural wood are not only connected, one with another by fungal strands, without mycorrhiza they would die.
In the past farmers and growers have neglected the  potential of mycorrhiza and generally have achieved  quality and yield without their help. Agricultural practices such as soil cultivation and heavy use of fertilizers hugely inhibit this beneficial fungus ‘infection’. Minimum cultivation is now seen to be a route to enjoy nature’s help. 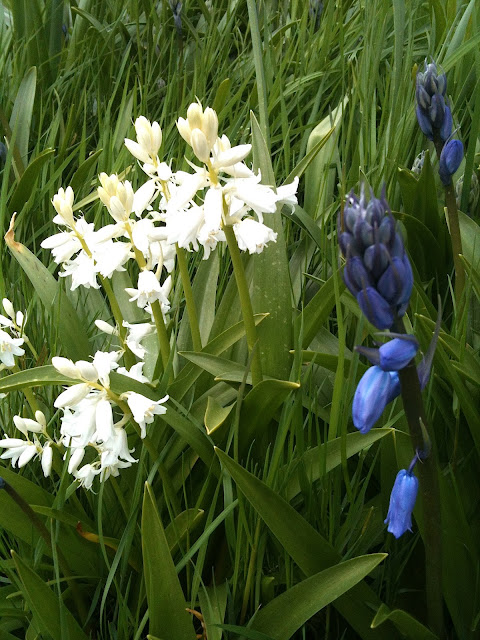 In recent years there has been an explosion in our knowledge of mycorrhizae and neglected research and new knowledge has now reached the public and farming domain.

Scientists now understand how plants are connected one with another in the wild. This may involve interconnections between many different species of plant and fungus. Fungal networks exchange sugar, nutrients and organic materials. Plants such as trees contribute disproportional amounts of sugar and have a profound effect on surrounding soil ecology. Young plants sometimes receive sustenance from their parents. Plants chemically communicate information about invading pest and disease. It is now recognised that mycorrhiza help plants withstand drought.

Only recently has the full significance been given to how mycorrhiza and associated fungi improve soil. In 1996 the fungal protein glomalin was discovered. Apart from ‘true’ humus it is probably the most long lasting organic constituent of soil. It binds together soil particles and is a powerful beneficial influence on soil structure. Recent research shows how the  strong penetrative forces of fungal mycelium can even penetrate rock! Our children will probably learn in future geography lessons how mycorrhiza helps to form soils!

Most growing media provide natural access to mycorrhizal propagules and spores. Many man made environments however, are deficient, and a new industry has emerged that sells fungus inoculum. Such products have an important role in ‘seeding’ fungal-deprived media. I have no idea whatsoever how great a contribution these much hyped products can make to everyday garden use. I  am sceptical, but wait to be convinced! I would love to hear from readers who have used these products.

Benefits of zero cultivations
You are not chopping up roots and mycorrhiza. The marriage between plant and fungus is maintained. Every time cultivations take place the plant and fungus have to start their relationship again!  Please excuse my exaggeration, in established plantings, deep root/fungus connections will survive cultivation. 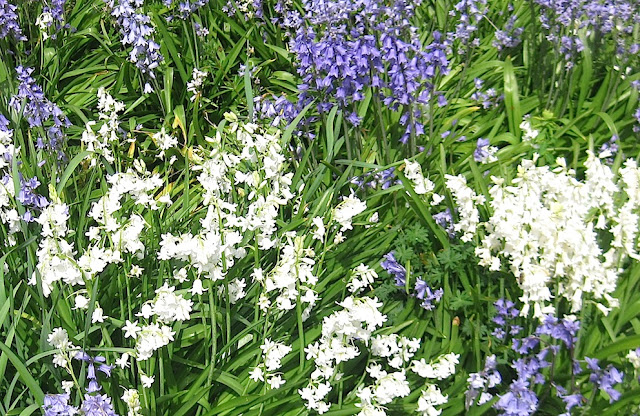 I was interested to read this website which describes how when weeds are killed by cultivation their mycorrhizal contribution to the soil is lost. It’s the same when they are killed with herbicide, except that the beneficial fungus has time to lay down spores and propagules before it dies.

Integral to no dig gardening is to grow plenty of plants. I now realize that this post on green manuring fails to recognize its mycorrhizal contribution.

Brassicas are one of the few plants that do not form mycorrhizal associations. I wonder if this is why with no mycorrhiza to help them they have evolved such wonderful deep penetrating roots. In the words of one blog follower the brassica, daikon radish, ‘busts open’ clay soil.


UPDATE 1st Oct 2013
I have often wondered that whilst mycorrhiza are so common one rarely sees them with the naked eye. My microbiologist friend Peter Williams has just sent me this picture of mycorrhiza on the roots of Sorbus aucuparia that he had dug up in his woodland garden. He reminded me that they have lovely characteristic fresh fungus smell. When exposed to the naked air within a few minutes their delicate membranes disintegrate and you can no longer see them. 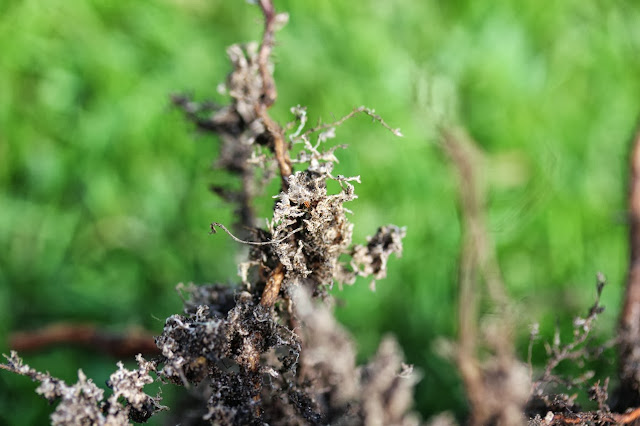