I have written before about the three fossil trees ginkgo, metasequoia and wollemia which all have the distinction of being known as a fossil before living specimens were discovered. Araucaria araucana, the monkey puzzle tree is often described as a living fossil because of its own ancient vintage.
Equisetum which you might hate in your garden hails from the carboniferous era and if you see the giant form in an Edinburgh greenhouse you might think you were there.

Conservation of Araucaria at Edinburgh Botanic
The monkey puzzle tree hails from Chile and Argentina where it is still widespread but is described as ‘endangered’ and is now receiving attention to preserve it and promote its benefits as timber and food. Indeed the popularity of its nutritious seed may be one of the reasons for its decline  - together of course  with loss of trees by indiscriminate logging.

Araucaria is not at present endangered in UK gardens and indeed there are many fine specimens in the city of Edinburgh. It has even been suggested for forestry planting. It’s a pity that it takes forty years to produce its heavy yield of edible seed. A concern about its long term security is that UK stock has been propagated historically from very limited imported material and has low genetic variability. Apart from making for the boring uniformity of monkey puzzle trees, lack of genetic diversity can lead to vulnerability to new environmental threats such as pest and disease.

Research back in Chile has shown that their native araucarias’ decline has not contributed to loss of genetic diversity which gives great hope for its future.

Monkey puzzles at Edinburgh
Edinburgh scientists have been involved with araucaria conservation and have planted a small display of  genetically distinct plants. 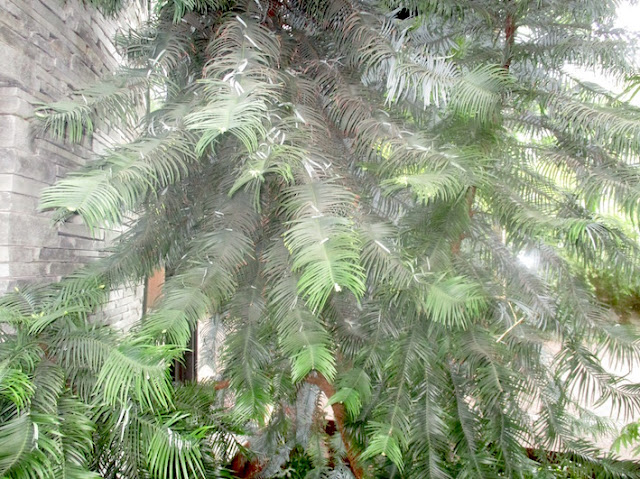 We were impressed with the ingenuity of displaying a wollemi pine in the foyer where it clearly is thriving and hitting the roof. Just as well as some wit declared its growth once grazed by dinosaurs, thrives when cut back. I have previously written in more detail about wollemi. An interesting feature is that in the now expanding world population of wollemi there is zero genetic diversity whether they have been propagated by vegetative means or seed. Every wollemi in the world is genetically the same clone. 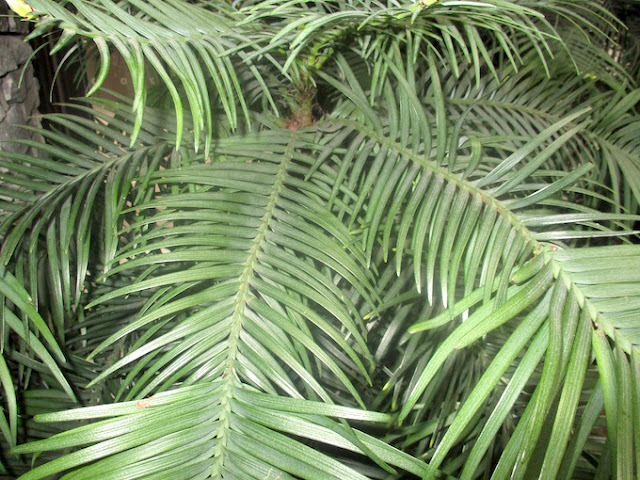 Equisetum at Edinburgh
You will not find it anywhere as a weed in the garden.They are too gooder gardeners for that! In the glasshouse however they have wonderful huge specimens. As it is a botanic garden we had better grace them with the correct common name which is horsetail.


This is my more detailed post about the Wollemi pine and monkey puzzle. It would seem that there is now less concern about the genetic diversity of araucaria in Chile than there was when I wrote it.
My post about controlling equisetum seems to have hit a raw nerve and has been read  30,000 times

Update. I have recently read this very fine blog about Araucaria