Be brave when you prune

I mangle my holly and contort my hazel
Suppose a young holly increased by 50% year. Not a foolish assumption if it had sufficient light, water and nutrients. You might come to the conclusion that your tiny plant was slow growing especially if as in our new garden fifteen years ago the rabbits found young hollies to be tasty morsels. We had several false starts!
After sixteen years this same mathematics leads to a new situation where your shrubs and trees start to take over and submerge less determined neighbours.
It is normal to control this process with endless variations of regular pruning. Where gardeners have done nothing for a decade or so of almost exponential woody intrusion they might have a problem.  When I retired from teaching 25 years ago I had clients who employed me to provide a solution.
Answers might include plant removal to give others space to grow or very severe pruning. Some shrubs actually rejuvenate if cut completely back to the ground.
I remember in my former garden I completely redesigned a complete section of my garden to exploit a few lovely large specimens. 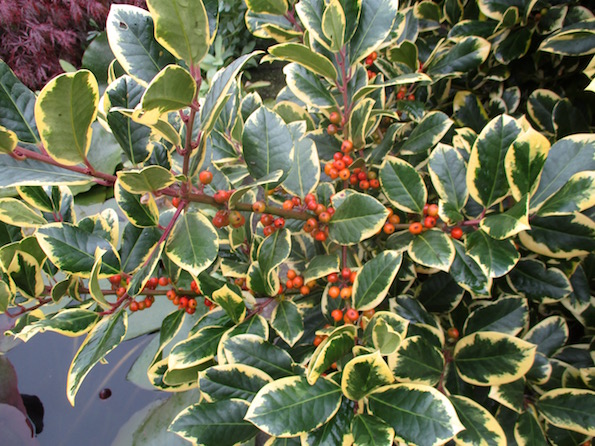 I have rather neglected my seven now rather large hollies. I have enjoyed their progression but now find that rather than contributing to the structure and beauty of my garden they now need take on a modified role.
My picture post shows my three hours of fun on the first two. You might not approve!

I have to tell you that when I prune large challenging plants I go into a kind of fury and prunings fly everywhere. Very large pieces are quickly detached. There is no ponderous musing or starting with small shoots that later need shortening!  Two days later I have had aches all over as my body accommodates to unusual strife.
I don’t want to say that you must turn into a whirling dervish to prune more to make the point that pruning should not be thought to be a delicate matter that a gardener need fear. (Perhaps also to prove to myself that an old man can still hack it)

I 'trunk' two old hollies
Some shrubs when cut hard back into old wood look very horrible - especially old conifers such as cypresses. The answer is often to go the whole hog and make them a tree!

Neither of the above cuts are quite close enough but it is important to leave the clear shoulder on the trunk. Four snags have yet to be cut.

I have gained an extra four square metres of space for underplanting. New growth on the holly will soon fill out a more pleasing head. Note no ridiculous and harmful tree paint has been used.
The second holly by my garden entrance was a similar problem complicated by having made several secondary trunks right from the ground. It was best to trunk this too. It is a variegated hedgehog holly with several extra spines.

Some notes for when I prune the rest of my holly


This one needs its ground level dimensions reduced by 50%, its top narrowed and stay clothed right to the ground.

See hazel's bones
The corkscrew hazel Corylus avellana contorta dangles beautiful soft yellow flowers in late Winter and in most gardens is an ugly monster!
The reason is that the beautifully sculptured curves of the branches naturally grow too closely together and make a very dense canopy. Worse just about every plant you buy grows vigorous suckers that grow as straight rods from the ground. Many gardeners are fearful of pruning and after a year or two have nothing better than excellent beanpoles for their runner beans.
I have been promising myself to thin out my plant this Winter when the branches were more visible. I was in the mood with the holly and took a further five minutes to remove 50% of the branches and in this case barely reduce overall dimensions

Links to further reading
I wrote about holly