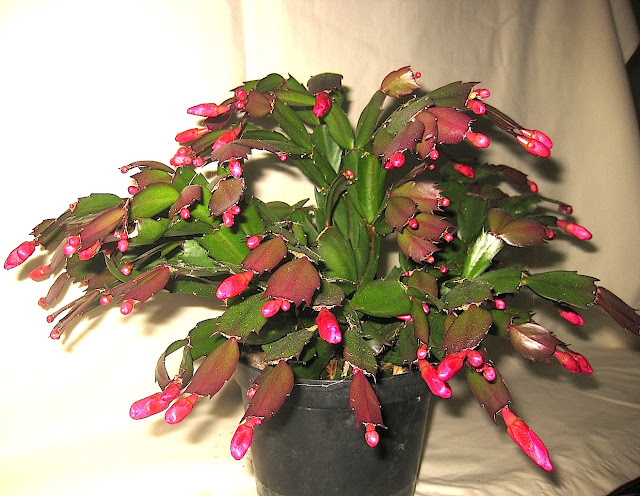 Schlumbergera - the Christmas cactus is yet another of those plants with confusing names. You will be lucky if it flowers at Christmas but it is a true cactus, although you might not recognise it as such. As far as latin names go, it has been so hybridized between diverse genera and species that almost anything goes!
Schlumbergera truncatus is now endangered in its natural habitat in Brazil. Indeed, matters have been made worse by introducing modern hybrids into the wild. It’s natural terrain is rocky, warm and shaded at about 1000 meters height.

When growing this cactus, it is important to recognize that it is not a desert cactus It does not need high light in summer nor drought in winter! It is described as an epiphyte and in nature grows on organic debris on the branches of trees under the leaf canopy. It also grows on shaded rocks in cracks and crevices.

We used to grow zygocactus - as it was then called - at Askham Bryan
College as a commercial pot plant for the Christmas market. In January, three cuttings were placed direct into John Innes No.1 compost into the same small pots in which they would flower later that year. They were watered and placed straight under the warm greenhouse bench! This otherwise wasted space is both humid and shaded - very similar to this cactus’s natural habitat. By October the ‘zygos’ were brought out and spaced out on top of the bench, where the brighter conditions were enough to induce flowers.

Christmas cacti come in many colours - pink, red, white and yellow. It’s low light requirement makes it an excellent house plant. In autumn and winter we stand our pots in plastic hanging baskets in our east facing conservatory. We live much of our life in this room so it is quite warm! The conditions suit the plants so well, they flower twice, in October and March. They do look rather moribund between flowering, and even more so in summer. Having seen epiphytes stressed in the wild, I persuade myself that a few brown scars are part of their charm!

If you occasionally forget to water, they don’t really mind. Ours get watered if I remember, about once a week throughout the year. Our own plants have a six month summer holiday in our very small, north-facing, glass entrance porch.
A good liquid feed for house plants is one formulated for tomatoes. Christmas cacti can be fed at normal strength every month throughout the year.
Some people have a problem with Christmas cacti dropping their flower buds. This might be due to low temperature or because there is insufficient winter light. Although in summer the plant will thrive away from the window in a bright room, winter light is much less intense and the days are short. Best that the plants are on a warm window-sill on the inside of the curtain.