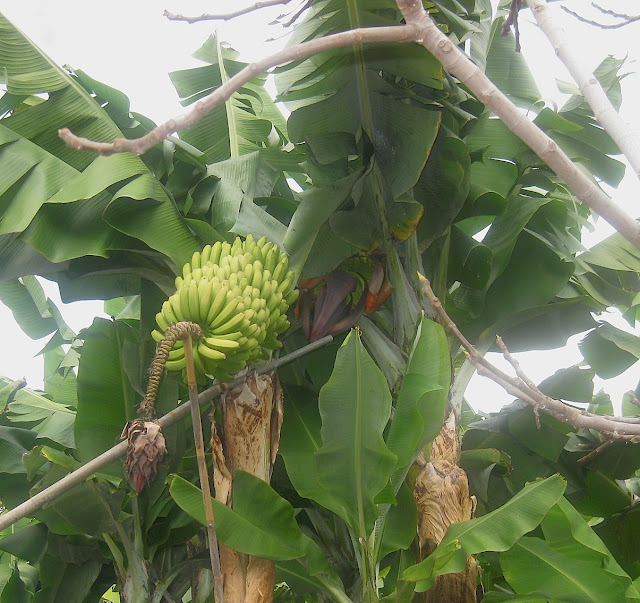 The nation was confused when a famous TV gardening-guru declared that banana was a herb, but he was right! In the botanical world, banana is a herbaceous perennial, it is therefore a herb.
In horticulture we get used to the dual uses of words.
To most of us a herb is defined as a plant grown for

(examples of herbs are given)

A herb (as normally defined - sorry TV guru) may be any category of plant such as a
Gardeners on holiday tend to ponder these things!


Aloe vera is a medicinal herb. It is a wonderful salve if you slice a piece and apply it to a wound or a sore. It thrives outside in the UK in summer but is not frost hardy. 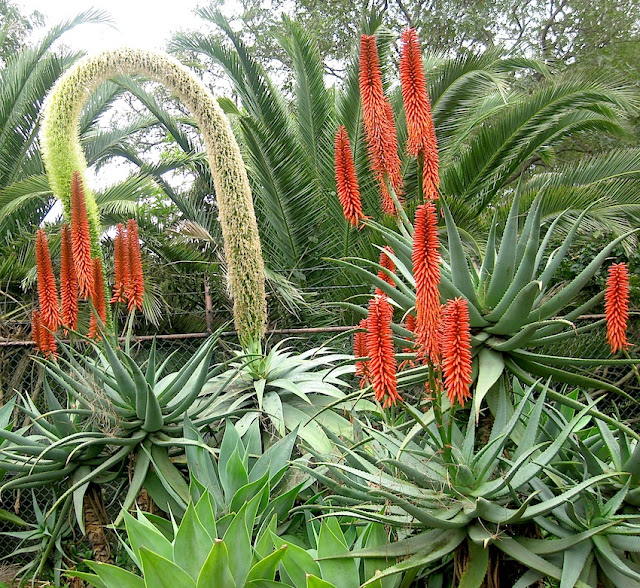 Aloe africana is Vera’s big brother. He is rather a handsome fellow. Agave attenuata appears rather fond of him

Bananas
Bananas are as much of a botanical herb as any plant in a herbaceous border. Not winter hardy in the most of the UK, it thrives at sea level here in Funchal. They are grown as a crop in private gardens, for ornamental purposes, and as hotel planting. Mike tells me that when they started to visit the island before residential development thirty years ago, these gardens were a much more important local industry than they are now.
It takes about fifteen months for a banana to provide fruit. The top of the plant then dies, but propagates itself by suckers. At home, if grown as a conservatory plant, it might take as many as three years to fruit. I have never eaten as delicious a banana as those that grow here. The commercial variety grown is called ‘Dwarf Cavendish’ but we have also bought in the the markets ‘apple-bananas’ and ‘silver bananas’ which taste even better!

Bananas produce a large male flower bud which rarely opens. Pollination never takes place and the banana develops  parthenocarpically without seed. Some members of the banana family such as Ensete have hard black seeds. Mike and myself ‘in our cups’, over the sangria speculated how mankind over the millenia would have selected for bananas without seeds. What is generally accepted is that because bananas are only vegetatively propagated the ‘genetic pool’ is small and the future of the commercial banana is decidedly insecure worldwide.


The split banana leaves are a natural wind protection and are induced by high wind. Contrary to some references on the net, this is a beneficial adaptation and is not detrimental to plant health.

Because the suckers are well developed when the parent plant is cut down growers get a crop about every ten months. No longer a source of commercial sugar on Maderia, sugar cane is experiencing a revival as a result of the rise in popularity of the popular drink poncha (which I enthusiastically recommend).