A defoliated box hedge in France.
News filtered home in May that Peter's garden box hedge was looking sick. My first thought was that it was the dreaded box fungus disease known as box blight. Normally thought to be the kiss of death to buxus in a garden, research on the net suggested that repeated spraying with fungicide might bring a revival. Probably not for Peter.

It was therefore good news when in June we heard the hedge was being defoliated by caterpillars! Good news in that caterpillars can be killed relatively easily by a caterpillar spray. I am not familiar with popular French pesticides but informed Brenda's son that many common insecticides are systemic and he should not use them as they are more effective against sucking insects such as aphids rather than biters. This is particularly true on woody plants. I suggested he might seek out a spray of Bacillus thuringiensis, an extremely effective biological control available in France but not in the UK.
In the event he bought a contact killer that killed the caterpillars within 24 hours. Pete needed a full fifteen litre knapsack sprayer to thoroughly drench his eighty meters of hedges. Unfortunately it was too late to reverse the damage and the hedge turned completely yellow and all the remaining uneaten leaves died.
I felt fairly certain that the culprit would be the ermine moth. It sounded to have all the classic symptoms with vast numbers of caterpillars devouring the leaves and producing copious webbing.

I am now writing this in France at the end of July. We are here for a party and the hedge is yellow and brown! What a disaster! It is only the box that has died. Other hedge plants are completely unaffected even where growth intermingles.
I turned to the RHS website and found that it was not ermine moth but a pest newly reported in the UK specific to box and now dubbed the box caterpillar. It looks as if it might be a future problem at home in the UK. Here in Toulouse it is extremely hot in Summer. No surprise that hot London gardens are now starting to suffer.
The hedge is now weakly starting to sprout new green shoots.

Optimistically I am hoping in the next few weeks it will green up again. For this to happen Peter must re-spray at the first sign of a new generation of caterpillars reappearing. I did today find half a dozen caterpillars he had missed. It was enough to just squash them.
It is extremely important that in late Spring next year he keeps his eyes peeled and at the very first sign of caterpillars emerging from within the protection of leaves webbed together he resprays. It is likely the hedge will survive being defoliated once, but twice I don't know.
I have done all that can be done at the moment. In the more obvious places I have brushed off some of the dead leaves that still clung to the plant. Not only is the hedge visually improved exposing the few delicate new shoots it might help in a very small way to speed recovery because the new leaves are more open to sunshine. I noticed some of the twigs contain chlorophyll and this will enable them to photosynthesise.

I have emphasised to Peter that unless the hedge improves substantially he should not clip any new green shoots this year.

Three days later and already a change of plan! The new shoots are coming quite quickly in this warm Summer weather helped no doubt by Brenda's generous irrigation. Unfortunately more caterpillars are apparent. No doubt some that Peter missed (although I now read that there can be three generations a year). I was going to spot spray but decided it would be wise to spray all the hedges again.
I checked on his spray. It was delta methrin. A very safe and effective spray. Chemically it is related to natural pyrethrum. Why it's almost organic! I was quite disappointed when I saw he had spent twenty five euros on a small 250ml bottle. I quickly changed my mind. We were in France after all. He had gone to his rural supplier - he has two horses - and bought professional product. I needed to dilute 10ml for a full fifteen litre knapsack sprayer. A cost of one euro!

It was great that he had a professional Berthoud sprayer that I had previously ordered, cost £130, for the spraying of weeds I do on our visits. I think in my life I must have emptied fifteen thousand full knapsacks spraying weeds but I have never sprayed a hedge! What a delight not to have to bend down. With the long lance it was very easy to spray and on the taller hedges to reach the top. Fortunately his nozzle was a cone one designed for such spraying.

There was more box hedge than I thought with a total surface area of seven hundred square meters. Unlike Peter I emptied two knapsack sprayers. It took nearly two hours.
Peter might have to re-spray later this year, or perhaps not. He will certainly need to spray next Spring or early Summer. (It later emerged that Peter had only sprayed half the hedges – those in prominent places hence the discrepancy in the amount of spray needed. These hedges are regenerating much more slowly!)

I have mentioned before gardeners who falsely economize buying cheap amateur sprayers. The large area of mature box hedging is worth infinitely more than the cost of the sprayer. Without a decent sprayer that is safe, accurate and rapid to use I doubt if the hedges would be booked for future healthy survival.

Organic control?
What about folk who do not use pesticides?
I rarely spray insecticide or fungicide in the ornamental garden but this was force majeur. There were far too many caterpillars for hand picking. How about biological control?

A very effective biological control is Bacillus thuringiensis. For reasons I fail to understand it is unavailable in the UK. It is a bacterial disease of caterpillars and the packeted powder in addition to millions of bacterial spores contains the disease's natural toxins that immediately kill caterpillars on contact. They recoil on contact and immediately die! The disease is completely harmless to other than caterpillars and usually maintains its infection of future caterpillar generations for the rest of the season. It is actually applied as a spray. As mentioned Peter can chose to use it in France as it is sold at the amateur store.
The RHS site lamely and unconvincingly mentions a parasitic nematode. Is this practical or just pie in the sky? Why is one biological control approved and not a better one?
I wondered if the caterpillars might be washed off with a forceful hose. If so would they climb back to return? When I picked off a caterpillar to get a picture it jerked away on what appeared to be an immediately spun thread. As I watched it, it gently threaded its way back. I doubt success but for a no-chemical gardener washing off might be worth trying.

And a parallel story.

In my first teaching post, Lancashire Agricultural College provided a garden advisory service. For several years there were numerous phone calls every Spring when ermine moth caterpillars ravaged local hawthorn hedges. It is etched on my heart the chemical control we recommended. It is not available now.
The fascinating thing was that the phone calls in the first year were very close to Preston. Each year the radius of infection increased by ten miles. I left four years later and moved to York. Ermine moth should have arrived there by now!
I jest, nature does not work like this. Numbers of pests might explode in population for several years but eventually a balance is restored. Pests and parasites increase in numbers and maybe change their habits of feeding. Sources of nutrition might be depleted, vagaries of the weather might bring massive destruction and geographical barriers might get in the way.
I might mention that Peter's box caterpillar similarly appeared out of nowhere with no apparent infection in the previous year.
I wonder what will happen to the box caterpillar if it really establishes at home in the UK.

The culprit and the damage it causes

It was interesting that all the original foliage was completely killed even if not obviously eaten. The whole plant had gone yellow, then the leaves dead and brown. I wondered whether this was the plants’ defence mechanism to deprive the caterpillars of green food or perhaps in contrast it was the result of a toxin that made the leaf more palatable. Whatever the explanation it was an absolute mess

Link to what happened over the next two years 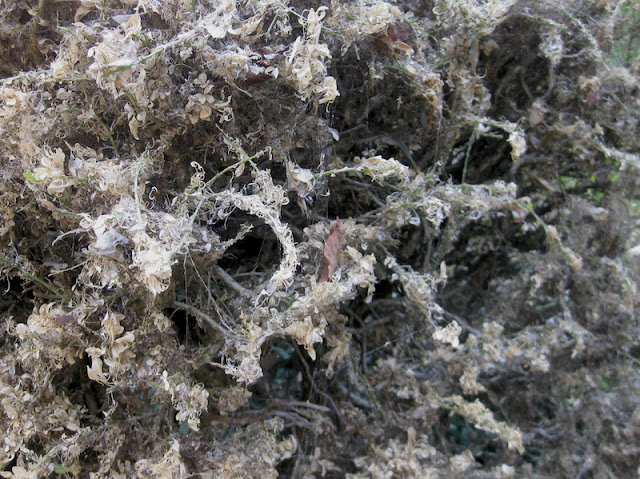