Sudden shrub death. Why has my previously healthy shrub died?


An occasional forum on topical matters

I went down to the village plot a week ago and found a well established Viburnum davidii and Clematis montana completely dead. As the picture shows a large dead Lonicera purpusii had reduced to a small surviving portion! I did not need to be a Sherlock to know the reason why. The beck at the side of the plot has it’s outlet blocked and in this wet winter had flooded a portion of the plot for more than a month. Although roots are relatively tolerant to flooding when it is cold in winter, this had been too much. The roots had died for lack of aeration. Other more tolerant shrubs and herbaceous plants had survived.

I was not a good day! At the bottom of my own garden the buds of  a five year old sorbus were starting to abort and go brown. Worse, a wonderful large azalea given to me by Peter Williams a year ago had the same symptoms. Our horrible wet year had been supportive to get the azalea established but now it was dying! I am relatively confident of the drainage of this low lying part of my garden, but in winter I know the water table can be high. Deep roots had died! It is a very common gardening phenomenon for such plants to die of drought in spring when the weather turns dry. And boy, has it turned dry. There has been no appreciable rain since January and dehydrating winds have almost continuously blown for months. I emptied a few buckets of water onto these two plants. Just in time. Surviving buds are now growing strongly. The plant said “thank you, for saving my life”. I congratulated myself and Brenda chastised me for not doing anything sooner!
A word of warning, Deeper down my soil is still wet. My heavy watering gives the plants respite to make new roots and capillary contacts to be strengthened . Unless it remains very dry I won’t be watering again.

For a year or two I worked as a ‘hands on’ horticultural consultant for a day every week at a very grand garden. The owners required a rapid makeover of an area for an important domestic occasion. Unprepared two foot high open-ground junipers from their own nursery were planted ever so carefully by one of the gardeners in September. Lifting unprepared plants - they should have been undercut several months sooner - caused considerable root damage. I knew they would survive the winter when the soil would be wet, but that they would be vulnerable when it dried in Spring. Although it was not my own project, I took on an undeclared watching brief. Unfortunately I missed my weekly visit in a very dehydrating dry windy Spring spell. When I returned and arranged a heavy watering it was too late for half of the plants!

My friend Iris’s front garden is on a gentle slope parallel to the road and which runs at ninety degrees to her garden. The garden itself is almost level. She was a very proud of her young birch which was well established and growing vigorously. Two years ago York had a spell of a few days of torrential summer rain. Typical of our area, nature then ‘turned the tap off’ for several weeks after. Iris was distressed to find her beloved birch severely wilting and showing signs of imminent death. A couple of buckets of water reversed the decline and it is now a very fine tree. Slopes are notorious for causing drainage problems. Sub-surface water had drained down the slope and it’s descent had been slowed by Iris’s flat garden. Roots in summer are highly sensitive to waterlogging and roots die for lack of aeration. When her tree, after six weeks of drought started to show signs of distress, Iris’s single watering gave the plant sufficient respite to make new roots and subsequently thrive. Inexperienced gardeners beware, plants can wilt because they are still waterlogged!  Do not water these! This phenomenon is often seen with overwatered house plants.

Years ago I had had a similar experience. I was very proud of my cherry tree ‘Stella’ grafted on the then new, dwarfing rootstock ‘Colt’. Rootstocks are relevant to these matters of root sensitivities to poor aeration. My tree was extremely healthy and had been established three years.
Their was a slight dip in the land contour and it was a very wet summer spell. Two weeks after very heavy rain my beloved plant was dead.

A lady had planted a new hedge and the weather turned dry. She was correctly advised to generously water with several buckets of water. If drought continued it would have been good practice to repeat heavy watering, perhaps every ten days. Unfortunately to ‘make sure’ she generously watered them every night!  On her heavy clay soil she created waterlogged conditions, roots were deprived of air and the hedge died.

Although  in this case there is no hope for my dead plant, sometimes cold-killed tops regenerate from roots in the ground. Only when satisfied that the top is completely dead cut hard to the ground. Do not dig them out.

We have a fine Betula jaquemontii. Brenda ‘suggested’ we should have a ‘grove’ of three. After several months of persistent negotiation I agreed. A local nursery had some very fine open ground plants. I ordered two and called later that day to collect the newly lifted trees. They were deceptively well wrapped with moist compost. I subsequently deduced that perhaps in a tea break, they had been left on the soil surface and been allowed to dry. Bare-rooted-tree roots must never be allowed to dry out . Planted in March the buds refused to open and by June the buds were starting to die. Peter Williams agreed with my own diagnosis and they were pronounced ‘dead ducks’ and I cut them down to the ground. I went out and bought two well rooted containerised trees. Three weeks later the cut back birch started to sprout. I now have a grove of five!

Peter gave me a fine container-grown cotinus last Spring. It showed some dieback last Autumn and is now completely dead. I do not know why! 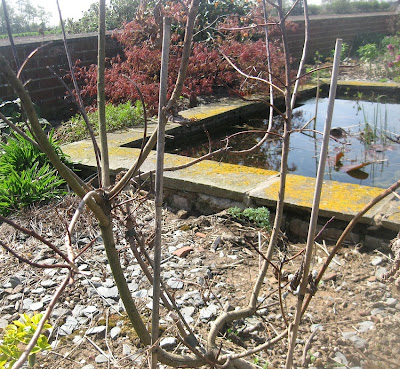 You can check a shrub is dead by bending branches and finding them brittle. When you scrape such branches there is no live green tissue.

One definition of a gardening expert is that he is a person who knows why his plant has died. There are many causes of tree and shrub death and some come straight from the garden centre. I would be very grateful to hear of reader’s experiences of sudden plant death. 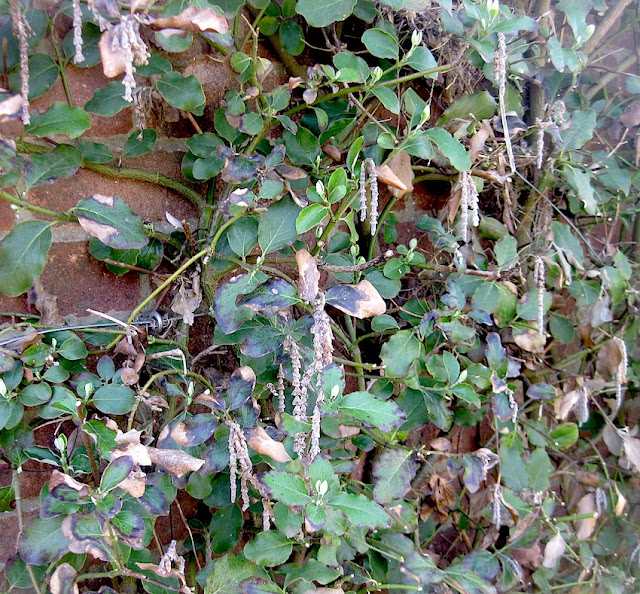 Judging by the large number of ‘hits’ I caught a raw nerve with my post about my cold-damaged Garrya elliptica. After I posted, it became considerably browner but as you can see from the pictures it is now on the mend.