Repeat week Golden oldies
Although quite a nice post this ones popularity was rather a mystery when it was read more than twenty thousand times and headed my top ten for six months. Were readers googling something different?

What idiots would go to Costa Rica to see alpine plants?

The cloud forest sounded very enticing. I imagined steamy hot tropical jungle. Harry Kennedy had found very skimpy details of a garden that brought together a collection of native flowers. It was in a deep valley at high altitude on the site of a great National Park. Rowena had a sat-nav device on her I-pad. Vague mention was made that the electronic maps might not be very precise over here.The anticipated journey time was a very manageable one hour and twenty minutes. I might mention at this point that Harry was driving a little rugged four by four. We had been told that such a car was necessary merely to access our holiday home. Nobody had mentioned special tyres. What could go wrong?

We ascended the winding narrow road for about two hours. We stopped to admire the view and recognised the many temperate flowers. Uncharacteristic Costa Rica flora such as iris, hemerocallis, montbretia, fuchsia and rose! It was getting colder. 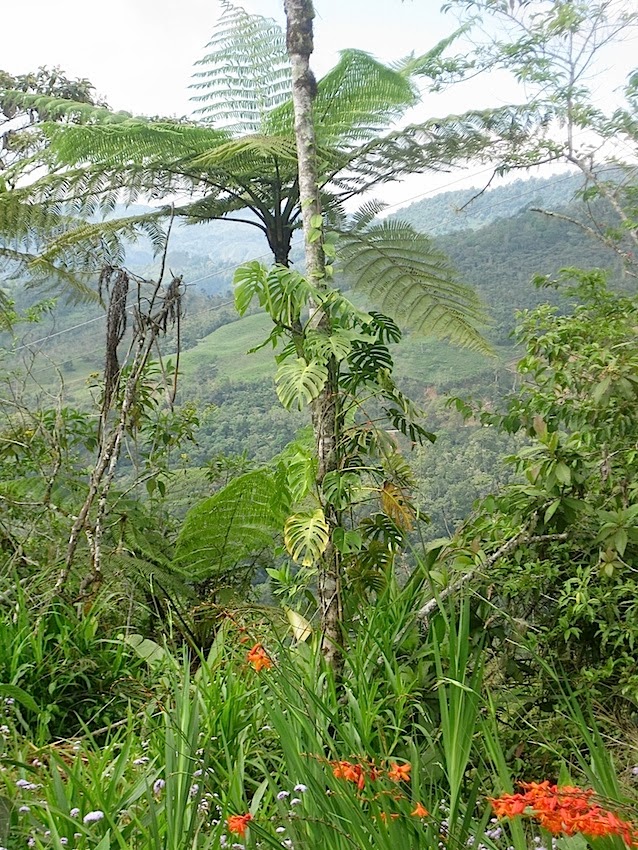 Another hour and the tree line was starting to open. We had entered the clouds. A bit like a drizzly cold day in Preston, Rowena’s home town. We should have found the left turn by now . Nothing was sign posted. After some bickering we decided we had gone too far and retreated three miles. Up a very unwelcoming bumpy steep gravelled track we found a rather seedy entrance. Except that it wasn’t what we thought! Had we read Spanish we would have found that it lead to a telecommunications unit at the top of Costa Rica at 3400 metres elevation! Another mile up a very rugged track we found what at first sight was what might have been a rocket launch site or a base on the moon.
We were debating  whether to turn back - the car engine was almost steaming when a far superior mountain vehicle came the other way and stopped. Two amused and bemused beaming telecommunications engineers - pun intended - had not encountered stupid English tourists up there before.
We overcame the language barrier to discover that we should go back to the road and continue for ten further miles.

Our tribulations were not over. We did find the start of the six kilometre track that leads to Los Quetzales National Park. We stopped at the only roadside cafe  -  the first signs of habitation for many miles -  before embarking on a not quite vertical descent down the almost unmade road. We tried to ask about the garden. Every enquiry was answered with a confident wave saying “that way, down there,”. We were pretty certain they did not understand the question!
We started down and it got steeper. There were signs of civilisation. We even had to negotiate a our way around an oncoming tourist bus! By now, even if we got there and found the garden it would be time to be leaving. What we saw of the national park itself was absolutely astounding but we  needed a week. Reluctantly we turned back and embarked on a three hour uneventful ride home.

Thoughts now we are home

Being a bit of a killjoy I often think that holiday experiences are best when you get home! So much to tell and the discomfort forgotten. Poor Harry, what a drive! Fortunately he loves driving and even though some of the roads were dramatic, we had total confidence in his skills. Don’t get me wrong about the roads, the surfaces are good if you do not go up wayward tracks! Road signs are precious and rare.
In hindsight we should not  have had our adventure at the very beginning of our holiday but waited to learn more before embarking. We should have taken warm clothes. When we at the top of Costa Rica at the telecommunication station we were frustrated and cold. The rocky alpine environment was a fascinating  botanical place but we did not have eyes to see it. We should have planned to stay over at one of the hotels in the National Park for a night. We should have realised that if you try to read a sign written in Spanish you can decipher a meaning enough to know that you are not driving into a garden! 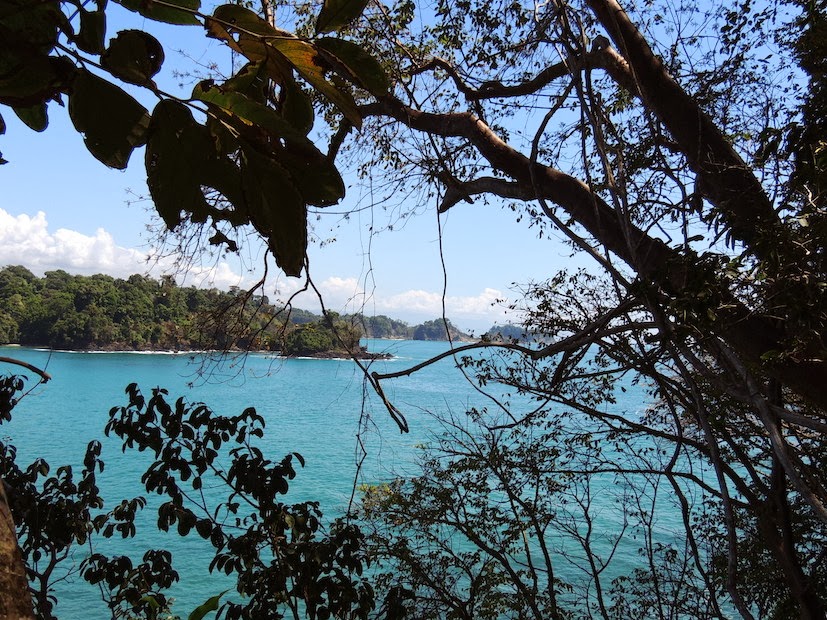 The next day was spent on the  tropical hot beach with the wonderful surf. Much to Brenda’s surprise the highlight of her holiday was playing in the sea! She had never expected to go in the sea ever again but the water was beautifully warm and the breakers were safe! The camera lies and she was not about to be swept away! 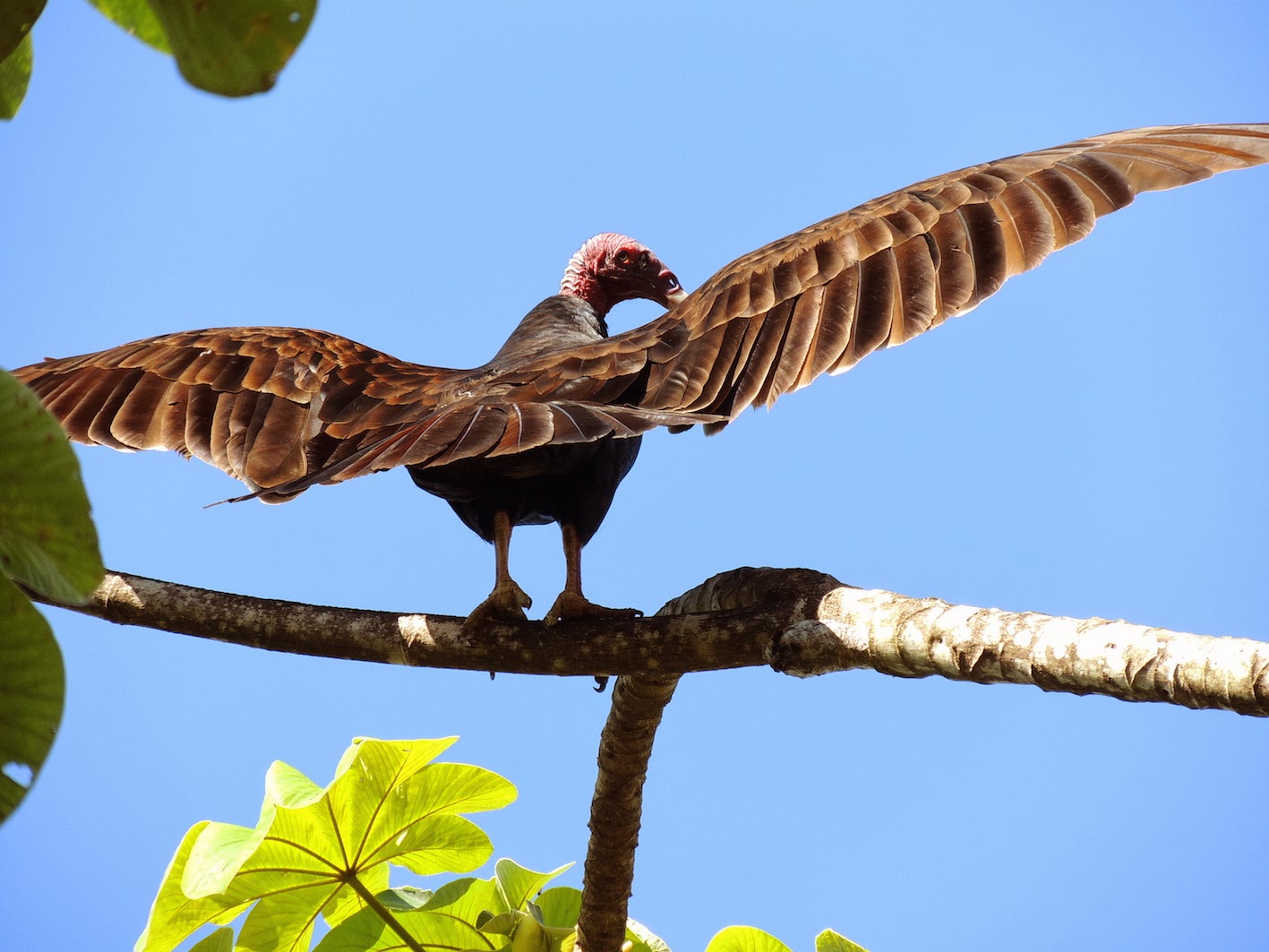 We enjoyed our holiday in Costa Rica so much that we are considering going again to celebrate Brenda's eightieth birthday next year so she can dip again into the sea. I wrote several posts which can be accessed from my theme column. It's under 'Gardeners holiday in Costa Rica'.
My own personal favourite was 'Strangler' which was hardly read at all.

Our sunshine holiday the following year was to Madeira