I have discussed this before! When I embarked on blogging as a no dig gardener and as a former lecturer on soil management I welcomed the opportunity to look in some detail at the harm done by excessive cultivation and - in the other camp - why gardeners actually dig.

To this end I started two series, one on why digging was harmful, the other on reasons to dig. In these articles I tended to discuss single issues in more detail than is possible in a lone post.
To be honest I was a little disappointed with the interest they created. Most gardeners are more concerned about growing their plants than contemplating their soil.

My article today attempts some kind of summary of the reasons to dig and at the same time to aid gardeners link back to old posts that provide more detail. After more than 400 blog posts things can get lost. Just as well you may be thinking and indeed there are some I would like to forget.

What is digging?
I suppose it really means deeply turning the soil. In its purest form single or double digging inverts a complete plot either in preparation for new planting or (ugh) between established plants.
When I describe myself as a no dig gardener the above definition is what I mean.
I am a minimum cultivator who eschews unnecessary soil disturbance but one who recognises that soil will sometimes needs disturbing - not least for lifting and planting. My small border spade is always shiny.

In my posts reviewed today my definition of digging is much vaguer. It includes general soil disturbance with spade, fork, hoe or shovel. It includes lifting, planting, hoeing, burying things, mixing, draining, level changes and much more.

Why gardeners dig, the good and the bad 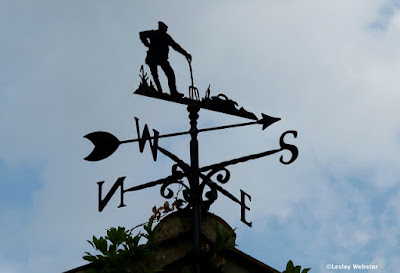 In my old series about reasons for digging there is an undeclared spectrum of approval. At the nadir is the belief that true regular digging in some way improves soil health and aeration (and so does a single operation in rare conditions of compaction, either natural or more often as the result of a builder’s dozer or a pan from a farmer’s plough or rotavating indulgence).

There is the issue that one cultivation leads to another and often creates the need for endless repetition. Those who insist on digging a heavy clay soil sow the seeds of the apparent necessity to dig again next year. Just leave it alone and let the worms and accumulation of organic matter take the strain.

My intermediate state of my approval includes genuinely based well thought out systems of soil management chosen by gardeners. This might include those clever people who win all the shows!

Sometimes there might be a specific need to cultivate the soil. Perhaps to bury wood, paper or char. (The worms will bury the manure). I have no inhibitions to digging to enable such things.

Links to my old series
1. Digging can be healthy exercise and good for the mind - especially for those who think it worthwhile

2. Rough digging exposes soil to the benefits of freezing. (but so might leaving it alone)


3. The gardening world is very confused about soil compaction and confuses it with  a well structured settled soil. Where true compaction occurs digging is a quick way to correct it

4. Digging is a speedy way to transform a weedy overgrown site into a clean planting area. This post describes proper single digging as recommended when we ‘dug for victory’

5. The generally unrecognised effect of soil cultivation is that it degrades organic matter and releases nutrients. Only a good thing if you also manure!

6. A gardener might want to amend soil texture by mixing in such as sand or clay. Be careful what you ask for.

7. This post looks at digging out debris. You have no idea what  toxic materials might have been deeply buried by previous owners. You might dig up something interesting.

7. You should have no inhibitions about shifting soil around to adjust levels. Be careful not to mix sub soil and topsoil - except where it might be a good thing!


8.  Severing invasive roots. I have firmed up my opinion that this is not very effective and that loosened soil is an absolute magnet for invasive roots. Just look how tree roots grew upwards into Peter’s pile of compost 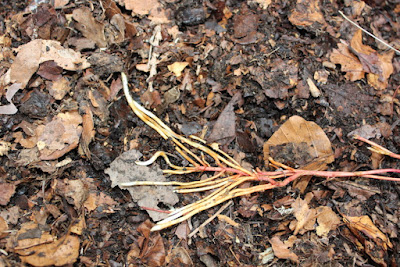 9. Burying wood and such as woody prunings, hedge trimmings  and newspaper in a trench a spit down is surprisingly beneficial to the soil.
I confess now that my straying into hugelcultur was a complete failure as a result of my (predictable) lack of watering in dry weather and failure to cover with sufficient soil.

As to my regular use of a spade I compiled a list of fifty uses of a spade (well not quite). Other uses have come to mind since - yesterday I used my spade to scrape ivy off a wall!