Her indoors: chequered progress of our bougainvillea

We bought our plant for 1.5 euros in the ‘floating flower market’ in Old Amsterdam. One can identity with a small plant you grow-on from a ‘pup’.

On returning home, our holiday souvenir was immediately potted into a five inch pot. It went straight into our well illuminated east facing conservatory. I would like to report smooth progress thereon. I cannot.

All was well at first and within three months it had made a very fine head of colourful bracts. It always surprises me how well a large plant thrives in a small pot - as long it is given a regular supply of water and nutrients.

It was quite traumatic. We returned from a few days away and found our plant wilted, leafless and bone dry. It looked dead. I have to admit I have form here and knew there was still hope!


Within a month it struggled back to life, then completely recovered. 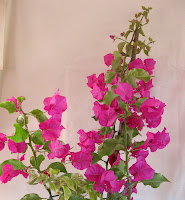 A non gardening friend expressed surprise that a mediterranean plant he associated with the dry soil and sunshine of Italy and Spain should be susceptible to a few days of drought.

He was unaware of the massive root systems such plants make in the ground. He also didn’t understand the huge amounts of water that leaves lose by transpiration. The large leaf area of climbers make them particularly vulnerable to water loss.

We noticed aphids at the top of the plant. I usually use Provado vine weevil killer for house plant pests. I like the vine weevil formulation, it is systemic and when watered on the soil it is absorbed and translocated within the plant. There is no messy, smelly spray in the house.

Ten days after using Provado the aphids were rampant. The idiot gardener (me) had overlooked the fact that translocated insecticides, unless applied as an overall spray, don’t work well on woody plants! After a belated spray, it was another month before the plant recovered and I emerged from the doghouse.